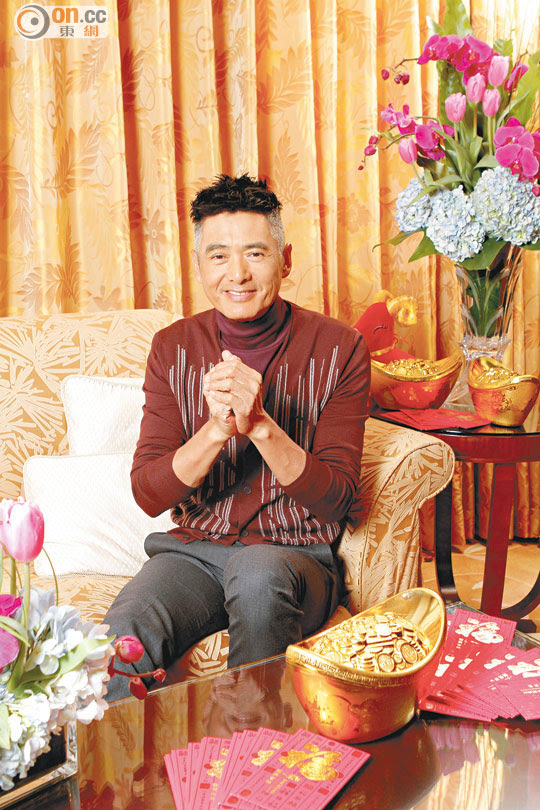 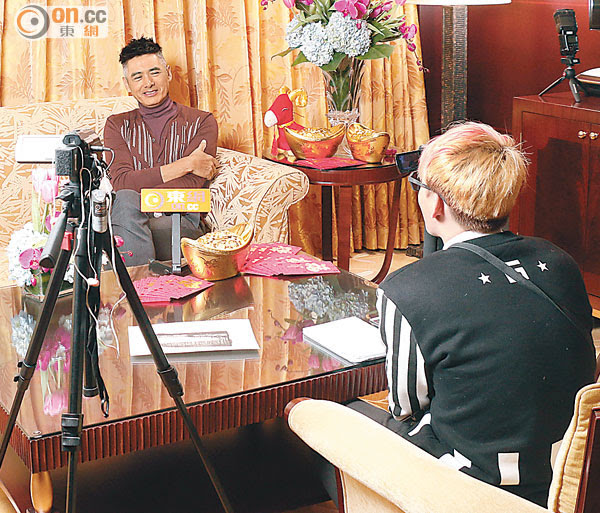 The so-called "Overage God" Best Actor Chow Yun Fat was born in the Year of the Sheep. This year at age 60 he remained energetic and cool! Fat Gor earlier wished the people of Hong Kong joy everyday, housing price drop so everyone has a home and for the atmosphere in the society to be even more harmonious!

"Sheep guy" Fat Gor talked about his Year of the Sheep wishes. The avid hiker said that he would like to finish all the walking trails of Hong Kong. Did he want to be younger and younger? He said, "No! Human can violate the power of gravity, unless people walk backward. Then everything would be backward! (Do you feel 60 is a new level?) It is, 60 is rare yet ancient! Haha! 60 is an age that is worth remembering. I want the most to get the senior $2 discount. I always use public transportation, it will be much more convenient!"

As for his Lunar New Year, Fat Gor said that he would mostly stay home and wait for family and friends to visit. He would read, go online and work on his photos. At most he would only go out for hikes. He would spend it in a relaxing way. "I rarely go out, I don't want the jet lag. In Hong Kong I would mostly hike! No one would hike during the Lunar New Year! The entire hill is mine, I can be the king of the hill! (Would you decorate your home?) New plant! I rarely buy tangerine plants. My diet is simple too, the most important are vegetables and fish, I would have a little Lunar New Year food like Yau Gok and Jin Deui!" Fat Gor also revealed that in the Year of the Sheep he will keep making movies, including Director Benny Chan Muk Sing's new film.

Fat Gor has remained on the top for 40 years. This year his Lunar New Year film FROM VEGAS TO MACAU 2 (DOH SING FUNG WON 2) so far made over 240 million yuan RMB (around HK$ 298 million) in the Mainland over 4 days in release. Two days ago it made HK$ 11.52 million in Hong Kong. Fat Gor yesterday replied, "Brother Jing (director Wong Jing) and I spoke on the phone, he was the happiest! I was happy too. Last year after 4 days we still haven't passed 100 million. This year we were much faster. As soon as we opened we made over 60 million! It more than doubled! (breaking last year's record of 500 million?) It looks that way, Brother Jing isn't too greedy. He wants to make 800 million, I hope he will!"

As for the secret of long term success, Fat Gor embodied the golden words "love your wife and you will get rich". Although he kept on joking around, the love between Fat Gor and Fat Soh could still be felt. Fat Gor said, "Without her by my side I would be done for, I wouldn't want to do anything! I am still a baby, if I don't take her outside who would take care of me? I don't shop for clothes, put on make up, I am all dirty. Having someone pointing at me would make watch myself more and make me better, if not I wouldn't bathe for several days. I would reek and stink, absolutely one stinky man! (What do you like about Fat Soh?) Simple, innocent, smart and hard working, she likes to study delicious dishes, some tastes only she can cook!" Fat Gor revealed that they still remembered to celebrate birthdays and wedding anniversary. He joked that he would give flowers and fish ball vermicelli "On birthdays I would give her a few fish balls and sliced fish cake, they can be round and triangular and a lot of fun! Haha! (How would you celebrate the 30th wedding anniversary next year?) Make a few glutinous balls for her to enjoy!"

In addition, Fat Gor felt that success lay with a simple life with less burden, not seeking fame, fortune or new technology, and keep on improving. Even as a Best Actor he would still humbly learn something new. "If you want to improve you can't be satisfied with yourself. The fact is I don't know about a lot of things. Even when I read scripts I would run into Chinese words I don't know, I am not too educated! When I don't know I have to ask people!"

As the city is engulfed in "capture Fat Gor" fever, two great goddesses Carina Lau Ka Ling and Cherie Chung Chor Hung have joined in! Both great beauties coincidentally posted their selfies with Fat Gor yesterday. Actually they had dinner together two nights ago. Hung Goo posted the photo and wrote, "It has been awhile!" Ka Ling later posted a photo with Fat Gor. "Good news! We drink to that!" Ka Ling not only posted a selfie but also a toast with Fat Gor, conceivably they were celebrating their film FROM VEGAS TO MACAU 2's box office success!

Hong Kong's Lunar New Year box office after the Lunar New Year's Day and the Lunar 2nd made HK$ 17.62 million on the Lunar 3rd and again broke the single day box office record. Three Chinese films were in close competition. Currently in the middle on the cumulative box office, FROM VEGAS TO MACAU 2 is only a little over 2 million around from TRIUMPH IN THE SKIES. Who will be the Hong Kong film champion in the end? Will Fat Gor be the box office champion in both Hong Kong and Mainland? We will know in a few days